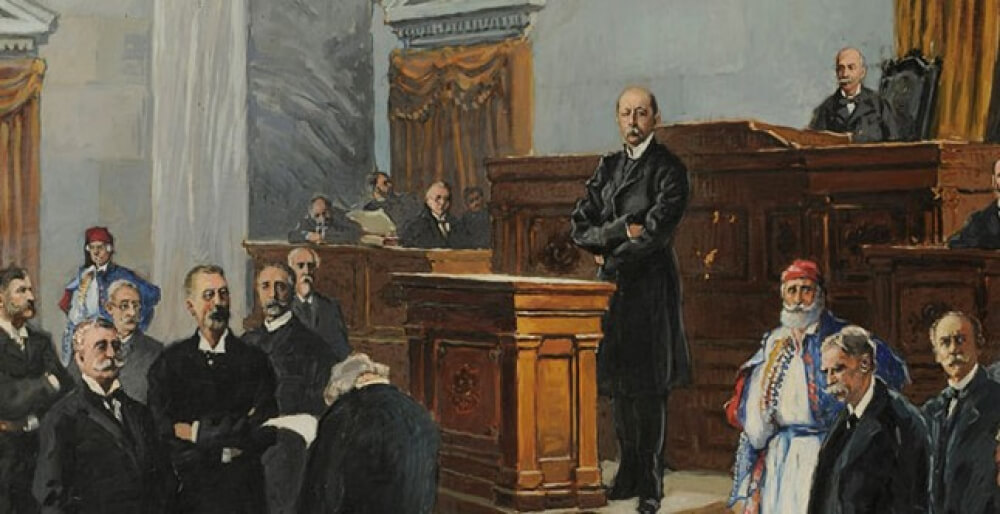 Parliamentarism is enhanced in Greece after the institution of the voteof no confidence by Charilaos Trikoupis in 1875. Henceforth, the governance of the country is handed to the party that holds the majority of the people as expressed in the elections. From the 1880s parties based on principle are founded that alternate in power and notable political figures emerge.

The Ionian Islands, after long Venetian rule (late 15th c. - 1797) and a brief occupation by the French and Russians, came under the protection of Great Britain (1814-1864). The struggles of the local population, but also the political purposes of the time, led to the cession of the islands to Greece in 1864.

An uprising of the Balkan peoples against the Ottoman Empire led to a new crisis of the Question d’Orient (1875-1878). The Greek national question was rekindled. After repeated negotiations, a final international peace treaty was signed in 1878 in Berlin, which led in 1881 to the annexation by Greece of Thessaly and the Arta district of Epirus.

After the establishment of the independent Greek state, continuous revolutionary movements occurred in the still Ottoman Crete, provoking interventions of the Great Powers. The Cretan Question particularly moved public opinion in Greece, which supported in various ways the struggle of the island, often even influencing the official foreign policy of the country.The great Cretan Revolution of 1866-1869, with its highlight in the holocaust of the Arkadi Monastery, provoked international public sentiment in favour of the Cretans. In the last decades of the 19th century, Crete was, with short breaks, in constant turmoil.The autonomous status that was granted to the island during the 1899-1909 period (Cretan State) did not satisfy the locals. Instead, it intensified their struggle for union with Greece, which was finally achieved during the Balkan Wars (1913).

Ottoman Macedonia, in which several revolutions occurred related to the developments of the Question d’Orient, was since 1870 a field of competition between the Balkan nations.From 1904 to 1908, Greek rebels, with the implicit support of the Greek State, acted in Macedonia defending Greek residents from the persecutions that were being unleashed by Bulgarian groups. At the same time, a strong network of diplomats, priests and teachers was established, that aimed at cultivating Greek culture and stimulating national consciousness.The armed struggle in Macedonia ended in 1908 with the Young Turk Revolution, which, temporarily but in vain, encouraged hopes of equality among all ethnic groups in the Ottoman Empire.