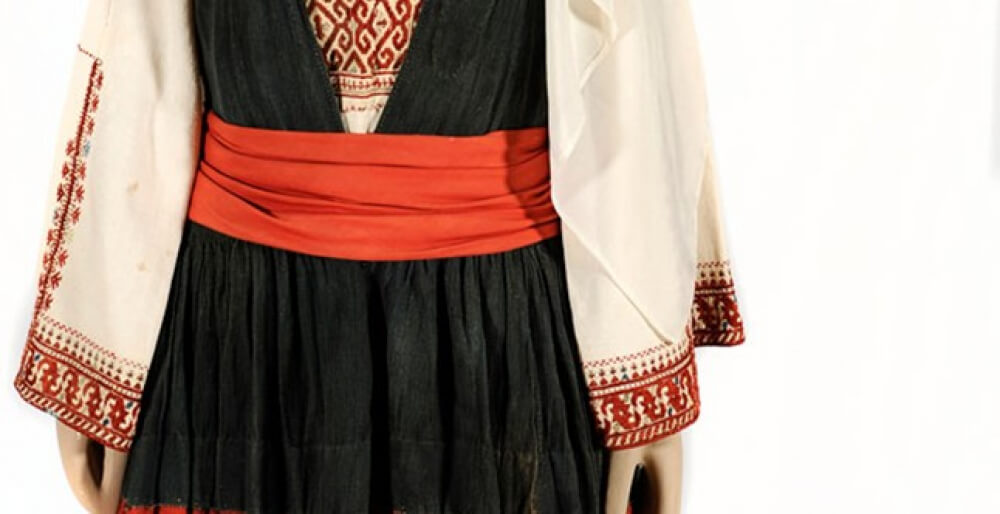 Still retaining aspects reminiscent of ancient Greek and Byzantine traditions, folk art flourishes from the mid 18th to the end of the 19th century. This era is characterized by economic and intellectual progress, due to the development of trade and craft industries and the revival of Greek education.

Traditional local costumes from all regions of Hellenism, jewelry, embroidery, textiles and metal, ceramic and wooden utensils and decorative objects constitute the collection, part of which is shown in the permanent exhibition.

The female traditional costumes on display are bridal and festive. Notable amongst these are costumes that belonged to famous figures of Modern Greek history, as the gold-embroidered dress of Kyra Frosini (Corridor L1), the precious Athenian attire belonging to the Benizelos family (Room L), the costume of Dimitrios Voulgaris, the costume of Kyriakoula Kriezi and Maria Monarchidou (Room M), the costumes that belonged to Ladies in Waiting of Queens Amalia (Room N) and Olga (Room K).

Worthy of special attention are the costumes which are distinguished for their inveteracy or their rarity, such as these of Limnos, Ios and Zakynthos.

The types of traditional costume, the materials and themes of decoration, vary depending on the climate, domestic production, lifestyle and cultural influences of each region. But even within the same region, traditional attire is found in different variations, depending on the age and social status of its owner. It works therefore with its own rules and is not the result of personal choice but of strict social adjustment.

During the 18th and 19th centuries, both in the mainland and on the islands, we find costumes with “sigouni”, “kavadi”, “saya”, “anteri” and costumes with dress. Common basic component of all costumes is the tunic, a development of ancient and Byzantine antecedents.

The female costume decoration is complemented by gilded aprons and belts, kerchiefs for the head and waist, colorful socks and gold-embroidered shoes and a variety of jewelry.

The intellectual and economic revival of the Ottoman Empire Greeks since the mid 18th century, contributed to the fast growth of silver- and goldsmithery. This art found expression in the varied jewelry of traditional clothing and the simple utilitarian objects of everyday life.

The self-taught anonymous craftsmen have provided a multitude of decorative motifs.Eastern decorative practices and assimilated western elements are combined harmoniously, and the influences of the Greek past are often obvious.

The main raw material is silver, which –pure, adulterated or gilded– is crafted in the traditional techniques: forged, cast, embossed, engraved, perforated, filigree, enamelled and niello, all coexist. The use of gold is more rare, usually confined on the islands, while precious, semi precious or common multicolored stones made of glass are often present.

Famous gold and silversmithing centers were Constantinople, Stemnitsa in the Peloponnese, Ioannina, Syrrako and Kalarrytes in Epirus, and the region of Thrace.

The male costume jewelry is much rarer. Those that stand out are the complex kiousteki of the chest and waist, as well as the garters, rings, cigarette cases, inkstands and amulets which hung on the neck with a chain.

The rich jewelry of the female costume formed a complete set of decoration that adorned the exterior appearance of the woman:

Elaborate jewelry for simple or complex bridal headbands, which emphasized their symbolic importance.