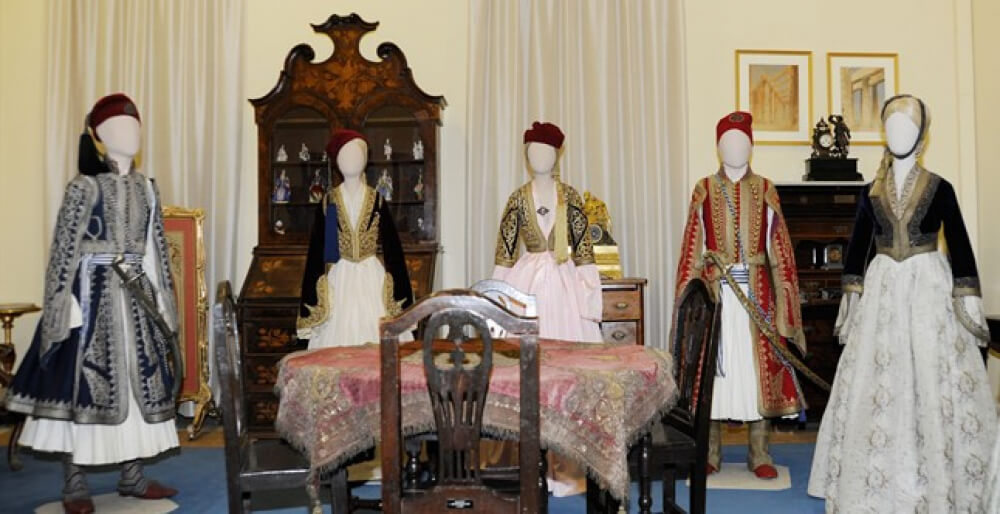 The exhibits of this room illuminate aspects of urban life in 19th century Greece. The furniture comes from the homes of historical personalities.

The table in the center belonged to Patriarch Gregory V of Constantinople, the desk on the right to Commander in chief Theodoros Kolokotronis, a small dresser drawer to Admiral Georgios Sachtouris, the furniture-showcase on the left to the naval fighter Anastasios Tsamados from Hydra and the armchair to Nikolaos Mavrogenis, Hospodar (ruling prince) of Wallachia.

The table clocks and the ceramic decorative objects are products of 19th century European philhellenic production.

The female costumes belonged to members of historical families of the Greek War of Independence and to Ladies in Waiting to Queen Amalia. Honorary Ladies wore, on demand of Amalia, the costumes of their region, while Ladies in Waiting the uniform of the Court, established by the queen herself. The Amalia type of costume was a combination of elements from various traditional costumes and gradually prevailed as the national female attire worn in all Greek urban centers.

Displayed from left to right, are the costumes of Theofanis Hatzopoulos, Fotini Gen. Kolokotronis (Honorary Lady in Waiting), Rousso Hourmouzi, Wilhelmina Reinek (Lady in Waiting) and Maria Diligiannis. The male attire with fustanella belonged to Gennaios Kolokotronis adjutant of Otto and last Prime minister of the Ottonian period.

Of particular interest are the aquarelles painted from 1836 to 1845 by the Scottish painter James Skene, depicting landscapes and monuments of Greece, especially of Athens.