The Floating Exhibition: Stations and history 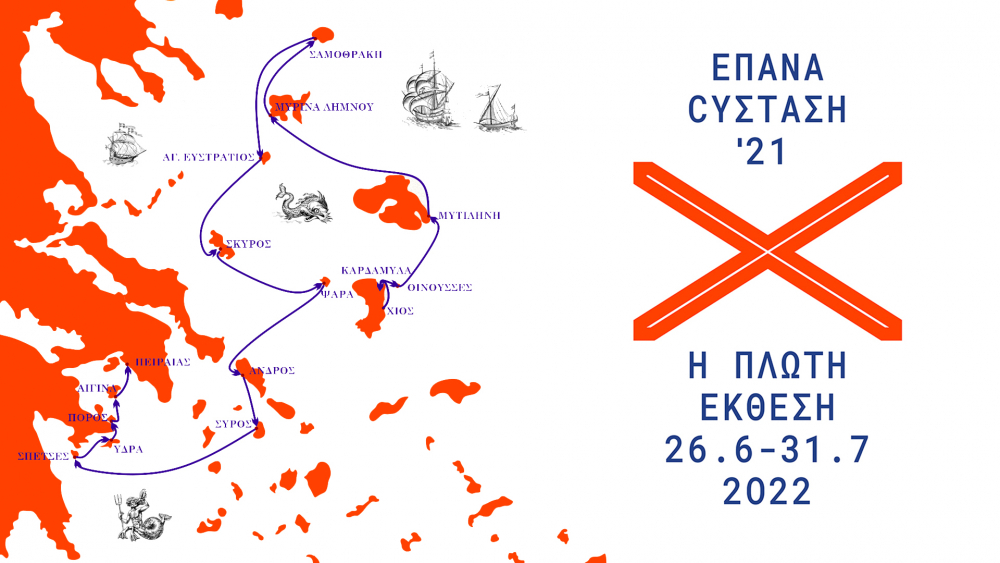 History hints from the 14 stations of the exhibition.

Situated in the eastern Aegean Sea near the coast of Asia Minor, Chios is a big and fertile island which in the early 19th c. prospered from mastic cultivation, craft industry and trade, enjoying special privileges as an important province of the Ottoman Empire. Although Chios did not play a leading part in the Revolution of 1821, it became a symbol for the Greek war of Independence after its destruction by the Ottomans.

At the end of March 1822 Ottoman troops disembarked to Chios to suppress the uprising. The island turned into ashes while most of the population was slaughtered or captured and sold in the slave markets. Chios massacre had a great impact on the European public opinion. In retaliation on the night of June 6-7 the fire ship captain Konstantinos Kanaris from Psara island blew up the ottoman flagship which was anchored near Chios. During the explosion Kapudan Pasha Kara Ali lost his life.

During its first mission on April 28 1821 the Hydrean fleet captured near Oinousses an ottoman ship carrying the Egyptian mullah Giazitzi Zante Mehmet Effendi with his family and a precious cargo. Being frustrated by the hanging of Patriarch Gregory V of Constantinople (April 22 1821) the Hydriots executed Mehmet Effendi and his family spreading that he was a high ranked officer of the Ottoman Empire and advisor to the Sultan.

Oinousses is cluster of small islands between Chios and Asia Minor coast where people from Kardamyla village (Chios island) settled in the course of the 18th c. Although many locals were force to move to the Peloponnese, Euboea and Andros due to the War of Independence, they returned and to the island and engaged in shipping. During the Revolution Oinousses were often a point of engagement of the two fleets.

On May 23 1821 in Eresos (Mytilene island) the Psarian Dimitrios Papanikolis with his coxswain Ioannis Theofilopoulos set on fire to a two-decker ship of the Ottoman navy using a fire-ship. This was the first successful operation for the Greek fire-ships which had a great contribution to the naval struggle of 1821. The Greek navy had found a valuable weapon against the powerful ships of the line of the Ottoman fleet.

Mytilene (or Lesvos) is the third largest Greek island after Crete and Euboea. Since it is located near the Asia Minor coast it served as a base for the Ottoman fleet and any involvement in the Greek war of Independence was considered as a direct threat by the Ottomans.

On February 25 1823 the Prefect of Andros island informed the Secretary of the Interior Ioannis Kolettis that rebels from Psara along with 700 fighters from the region of Olympus mountain disembarked on Lemnos and spread the Greek revolution in the island. This is the only notice that we have regarding any revolutionary attempt in Lemnos. However many Lemnians were members of the Philiki Eteria (Society of Friends) the secret organization which prepared the Greek War of Independence, and fought many battles at sea and on land.

Lemnos is an island in the northern part of the Aegean Sea very close to Constantinople. During the ottoman rule the island was in decline and its geographical position was a limiting factor for any involvement in the Revolution. Nevertheless Lemnos had significant role in the naval operations of World War I while the first armistice between the Allies and the Ottoman Empire was signed in 1918 in the Gulf of Moudros (a small town of Lemnos).

Samothrace is a remote island off the coast of Thrace near the Dardanelles. On the eve of the Greek Revolution many notables of the island were members of the Philiki Eteria (Society of Friends) the secret organization which prepared the Greek War of Independence. In May 1821 the locals refused to pay the annual taxes and rose against the ottoman rule along with Ainos, Moschonisia and Aivali “as they have nothing else to give only lead and gunpowder”.

On September 1st the ottoman army disembarked on the island to suppress the uprising. Many inhabitants were massacred or captured and sold in the slave markets of the East. Churches and houses were ruined. The leather-bound Gospel from the old church of the village of Samothrace witnesses this tragic incident. The Gospel is on display in the floating exhibition of the NHM.

Located 18 miles away from Lemnos island Aghios Efstratios is the most remote island in the Aegean Sea. In the 16th century the island grew thanks to animal husbandry and acorn collection. During the Greek war of Independence many of its ships participated in the naval operations and a large number of locals served in the Spetsiot and Psarian fleet.

Between 1829 and 1962 Aghios Efstratios became an exile place for political prisoners, mainly communists. Today the population of the island (about 300 people) has fishing as a main occupation.

Skyros is the biggest island of Northern Sporades a cluster of 24 islands in the Aegean Sea four of which are permanently inhabited. It is located in the south of the cluster about 35 km away from the eastern coast of Euboea.

During the Ottoman rule Skyros’ inhabitants worked as stock-breeders, farmers, fishermen, merchants, or sailors in Psarian ships. Many members of the Philiki Eteria (Society of Friends) the secret organisation which prepared the Revolution came from the island. Skyros joined the Greek War of Independence offering many ships and sailors. It also served as a shelter for many chieftains or refugees from Asia Minor, Thessaly, Lemnos, Chios and Psara. After the end of the Revolution Skyros was integrated in the Greek modern state.

Psara is a small island in the eastern Aegean Sea which had a great contribution to the Greek Revolution. Having a significant naval tradition from the 18th c. on the eve of the War (1820) Psara had the third largest fleet in the Aegean. The island joined the Revolution on April 10 1821, immediately after Spetses. The Psarians were fearless sailors many of whom emerged as legendary figures of the War. They also established a democratic central government (The Parliament of Psara) open to all social classes.

In June 1824 the Ottoman forces conquered the island and captured the Psarian fleet. The locals who survived the destruction resorted to the Cyclades, Aegina and Spetses. The destruction of Psara deprived the Greek fleet from a significant part of its power.

The visit to Andros is cancelled due to bad weather conditions.

On the eve of the Greek Revolution Syros was a developing island with approximately 4.000 inhabitants. Although the ottoman presence was rare the island didn’t join the Revolution. This was probably because most of the locals were Catholics and had no skill in combat. Nevertheless the island become a shelter for many refugees from all over Greece (mainly Chios, Psara, Kasos and Crete) and from Asia Minor. Despite the reactions from the locals, Syros neutrality and the protection provided by France led to the refugees integration. After the end of the Revolution their presence was the main reason for Syros’ economic growth. Ermoupolis (the area around the port) became the largest economic, commercial and industrial centre of the newly born Greek state.

On the eve of the Greek War of Independence 1821 Spetses had already a revolutionary tradition and was considered as a great naval power in the Aegean Sea. Not only was the island the first to offer its fleet, crews and funds to the Revolution but also encouraged others such as Psara, Samos and Hydra to join the war. Meanwhile the Spetsiot fleet blocked the fortresses of Monemvasia and Nafplion on the Peloponnesian coast which were of a high strategic importance.

Spetses had a major contribution to the War of Independence trying also to keep a balance between the powerful Hydra and Psara which had also a large fleet and great naval tradition. Although the Ottomans tried to destroy the island in 1822 the Spetsiots and the Greek fleet managed to repel their ships. Spetses was integrated in the newly born Greek state and had a great economic expansion until the beginning of the 20th c.

With approximately 15.000 inhabitants Hydra was undoubtedly the most powerful Greek island. Having a great economic expansion since the Napoleonic Wars it ships and funds played a major role in the war at sea. Despite the fact that Hydra’s notables hesitated to join the Revolution, the island raised the revolutionary flag on April 17 1821. Thenceforth Hydra led all the fields (political, financial and military). Hydriots supported the revolution offering ships and crews. There were times they cooperated with the other islands but also there were occasions they clashed with them. They contributed to the contraction of the two loans from the United Kingdom and finally they participated in the civil war (1824-1825) supporting the Provisional Government. Even after the Revolution, Hydra made its mark in the newly born Greek state.

Poros island joined the Greek War of Independence right after Psara providing the Revolution with ships, crews and funds. During the war the island emerged as the seat of the Greek Provisional Government and served as the first naval base of the Greek fleet due to the natural fortress of its golf. Poros was a secure place where weapons, munitions, pharmaceutical and other material sent by the philhellenic committees of Europe were kept.

In August 1st 1831 during the civil war between the first Governor of Greece Ioannis Kapodistrias and Hydra island, the first flagship of the Greek fleet, the frigate “Hellas”, and two other warships were burned in the port of Poros.

Aegina joined the Revolution along with Poros. As an easily accessible and secure place the island became a shelter for thousands of people from Central Greece, Peloponnese, Eastern Aegean Sea, Galaxidi, Psara and Athens.

Between 1826-1827 the island emerged as the seat of the Greek Provisional Government and during the period 1827-1829 it became the first capital of the Greek state.

During Kapodistrias’ area (1828-1831) more than 10.000 people lived in the island. It was in that period that an orphanage was established. Apart from that building which also housed the National Printing House, many others have been constructed such as the archeological museum and the governor’s mansion which hosted the first Library of Greece.